Mackenna is a fifth-year graduate student in the in the Department of Physics and Astronomy. She works on measuring ages of known and newly identified young stellar associations near the Sun using a variety of methods, including lithium abundances (the lithium depletion boundary). This includes work identifying low-mass members of existing young stellar associations.

Mackenna also works on placing robust limits on unseen stellar companions to planet hosts from the K2 and TESS missions. Her framework has already been used to aid with exoplanet validation (e.g., Rizzuto et al 2020 and Mann et al. 2020).

You can learn more about Mackenna's work at her website. 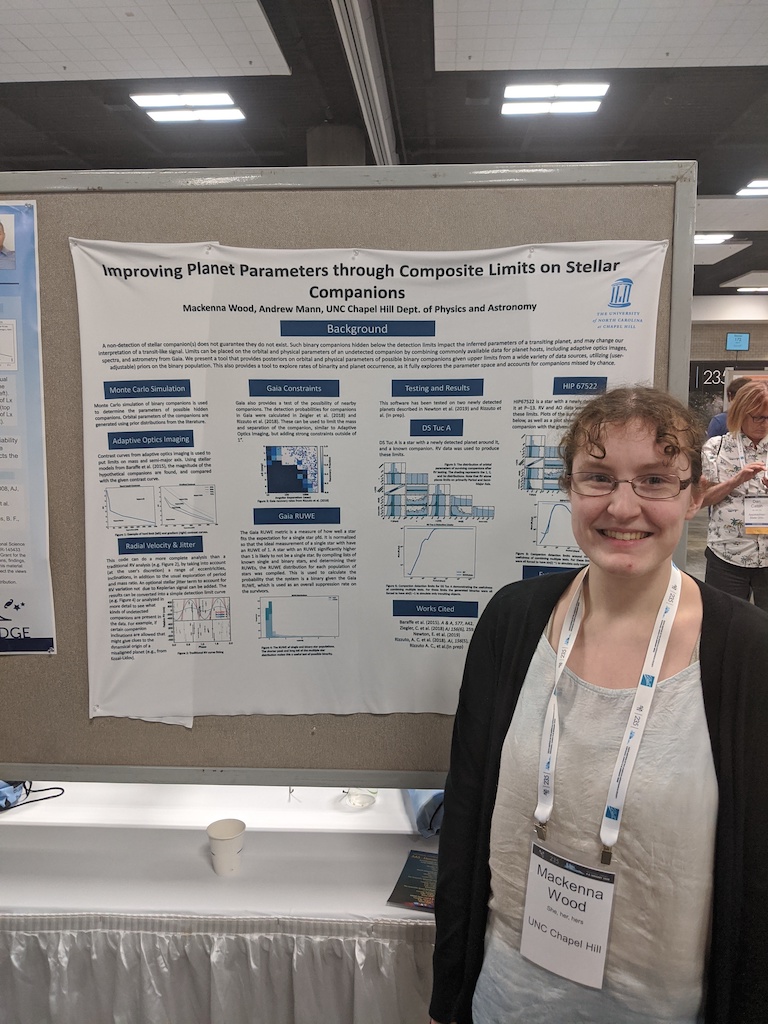 Pa Chia is a fourth-year graduate student in the in the Department of Physics and Astronomy. Her research focuses on characterizing atmospheres of young planets through their transit depth as a function of wavelength (transmission spectroscopy). The greater goal is to study how planetary atmospheres change with time by comparing the transmission spectra of young planets to their older counterparts.

The figure on the right shows transits of the 700 million-year-old planet, K2-25b, taken with (top to bottom) K2, LCO, MEarth, and two Spitzer bands. The K2 transit appears 'smoother' because of the long integration time (30m) compared to the other datasets (3 minutes or lower). The difference in transit depth over these wavelengths tells us about the overall properties of the planet. More on these observations can be found in Thao et al. (2020). 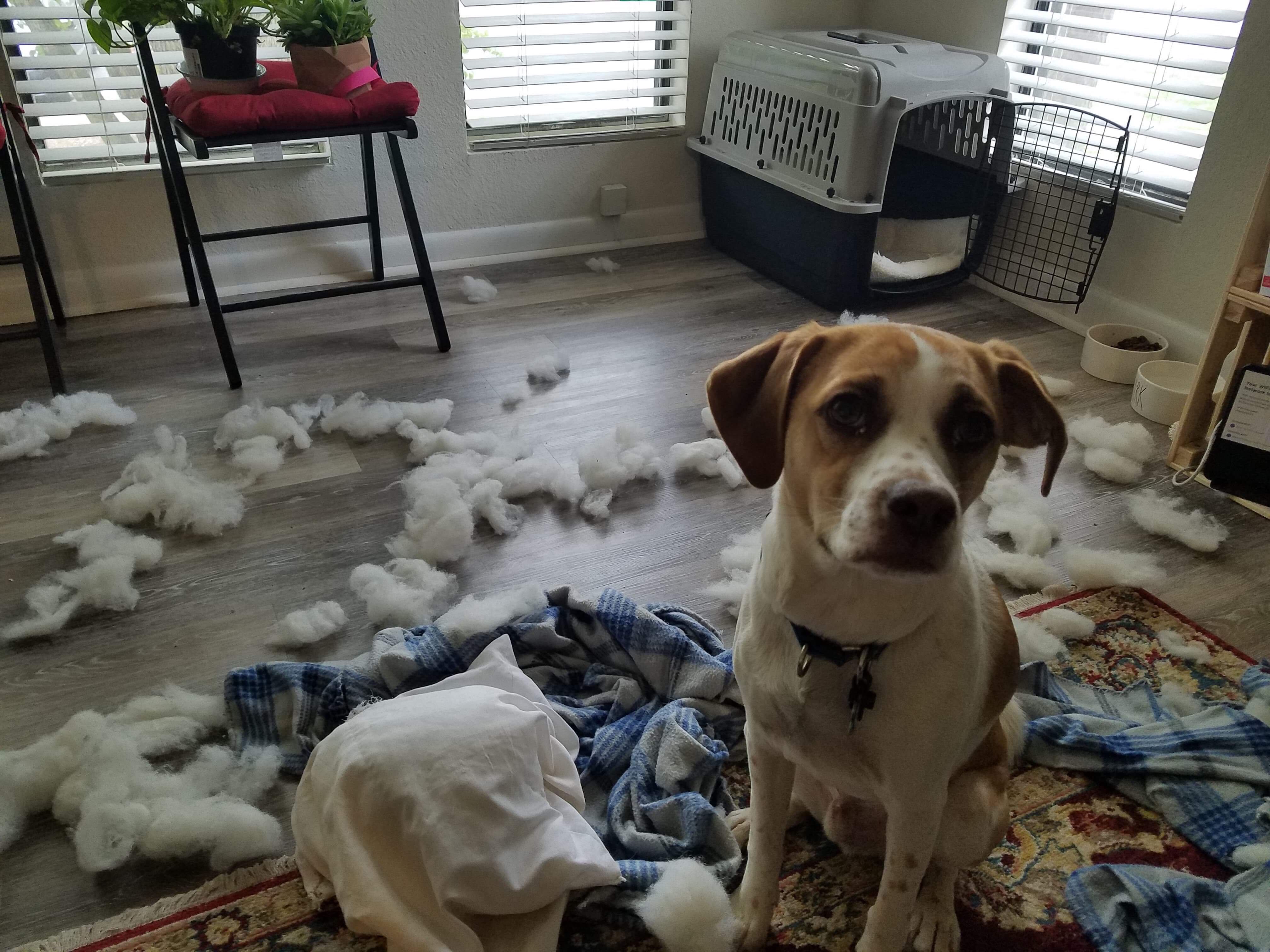 Pa Chia's dog, Wally, is a major contributor to her scientific productivity, but needs to work on his organization skills. 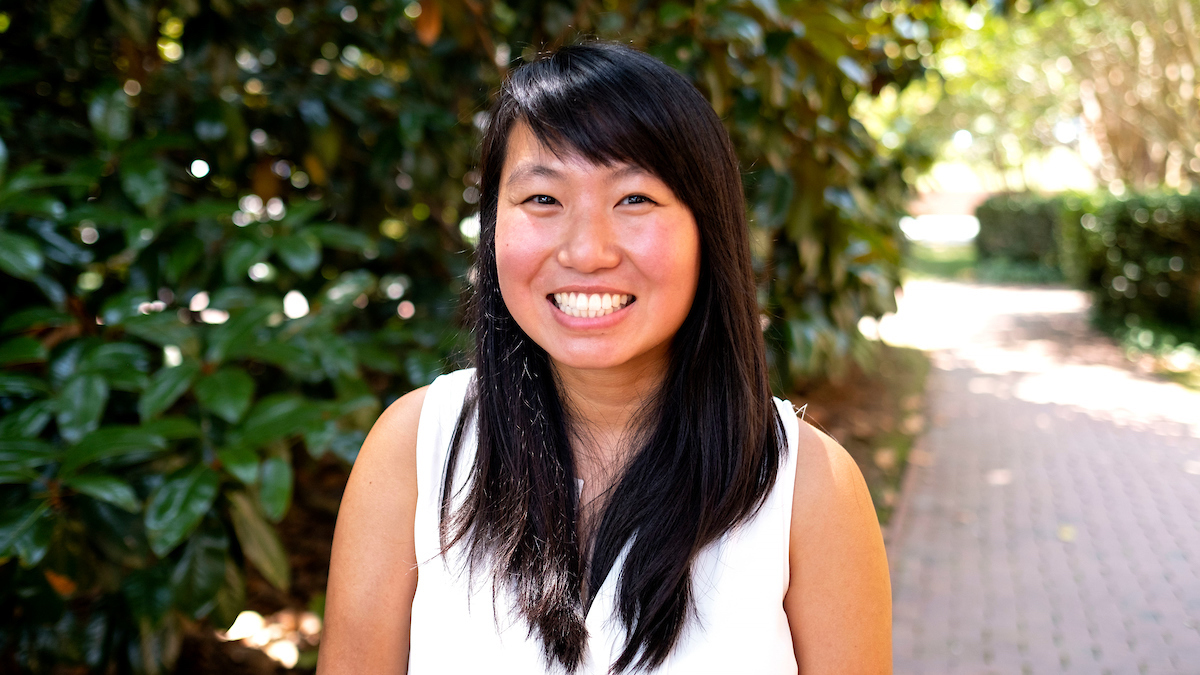 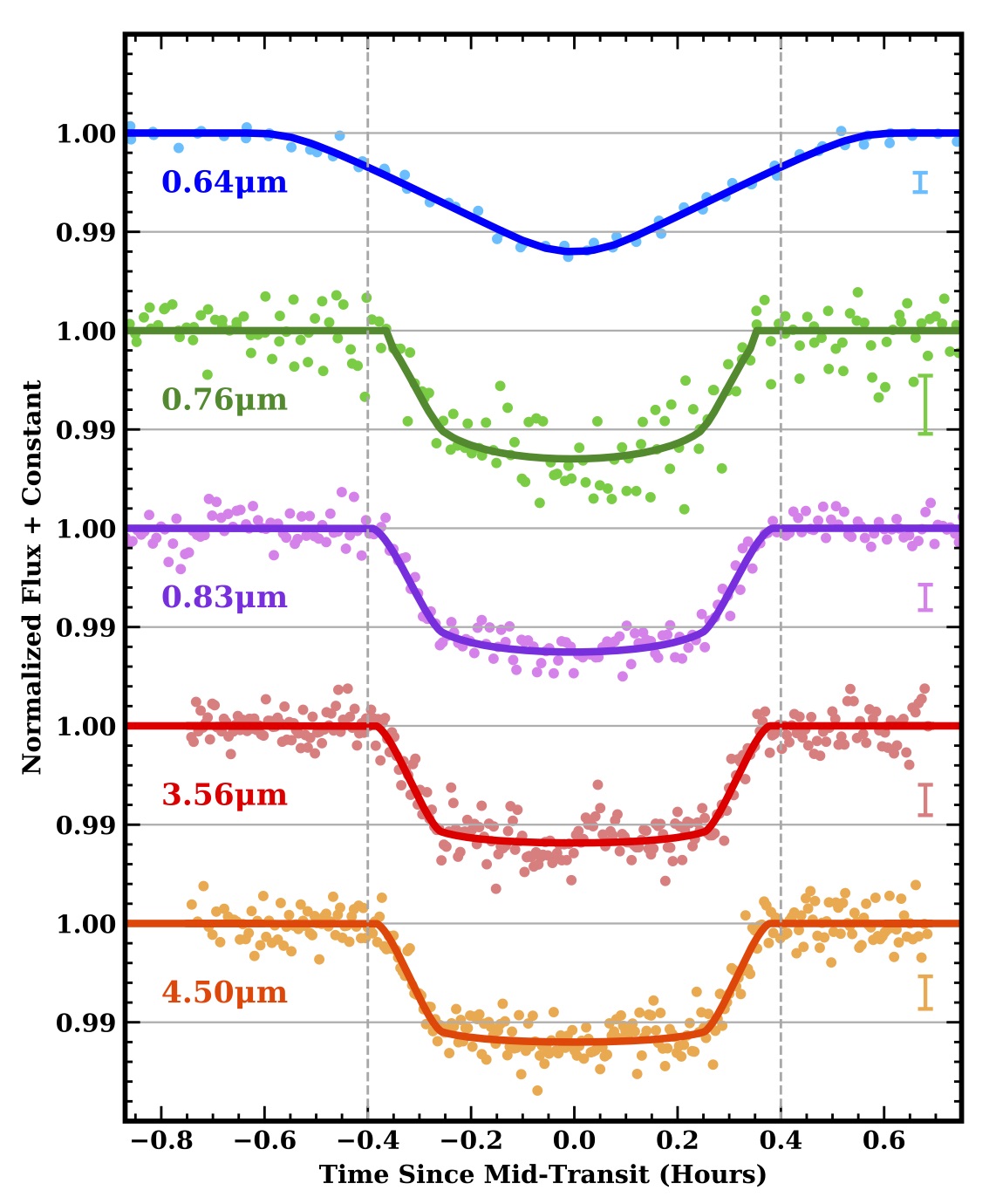 Reilly is a fourth-year graduate student in the in the Department of Physics and Astronomy. He is interested in young exoplanets and stellar systems. His current work focuses on the detection of the extended atmospheres (exospheres) of young planets using transmission spectroscopy in regions related to atmospheric escape (e.g., Hα and He10830). The greater goal is to understand how planets lose their atmospheres as they evolve (e.g., photoevaporation).

When Reilly is not poring through data, he likes to play guitar, shoot photography, and play tabletop games with friends. 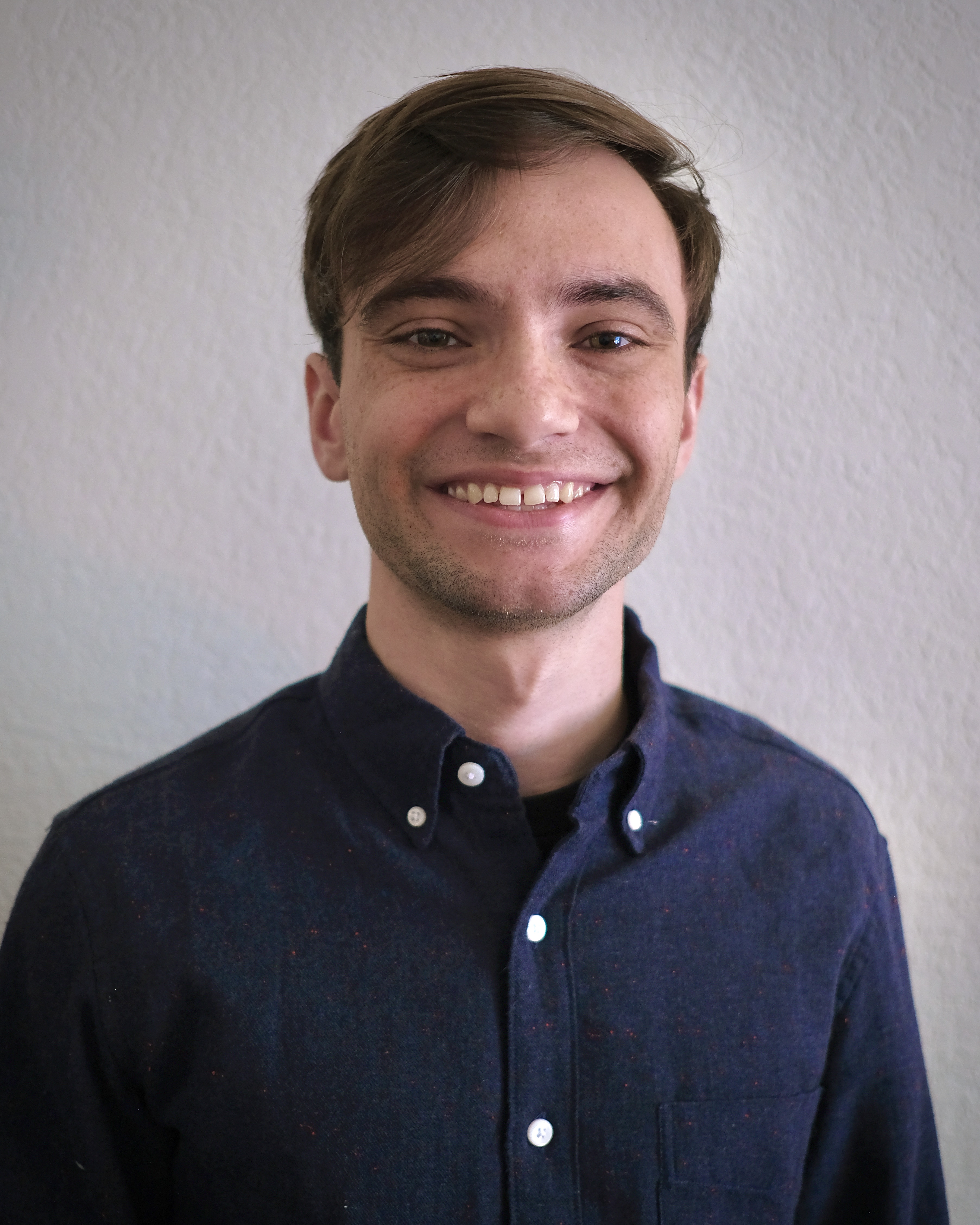 Madyson is a new graduate student, and has been on the team for 3 years as an undergraduate. Her research focuses on building automated querying and search tools for rapid characterizing of newly identified planets (and their host stars) from the TESS mission. She also works on age-dating associations based on stellar variability.

Madyson is a Chancellor's Science Scholar, and spent the Summer of 2020 as a NASA GSFC Summer Intern. 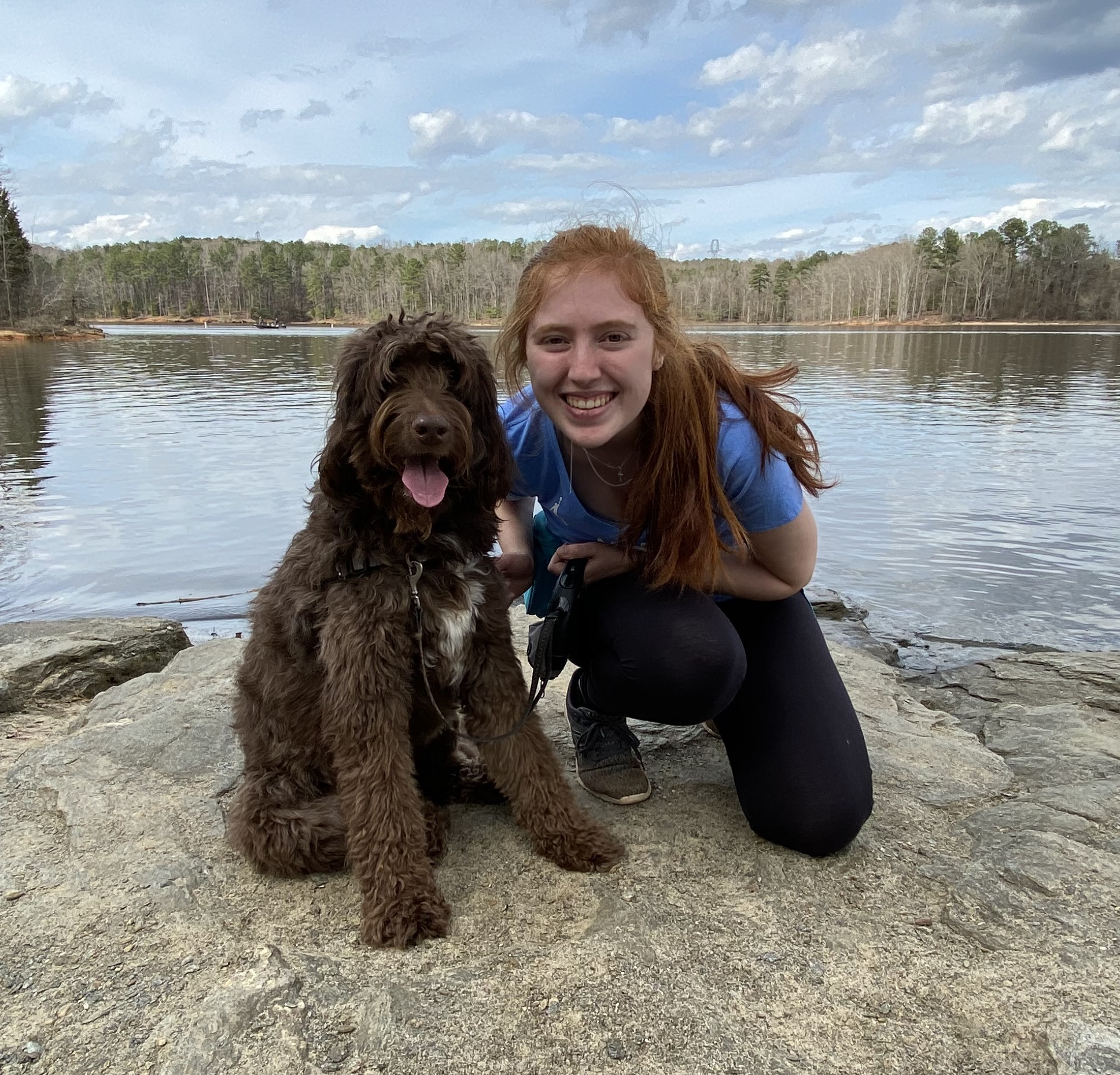 Matt is a fourth-year graduate student in the Department of Physics and Astronomy. His research interests include both observational and computational astronomy, particularly on stars and planets. He is also interested in science policy, science education, and science communication. Currently, Matt works on deriving improved radii of young stars with protoplanetary disks using a combination of stellar models and semi-empirical relations. The goal is to understand how often planet-forming disks (and hence the young planets they form) are aligned with the rotational spin of their host stars. 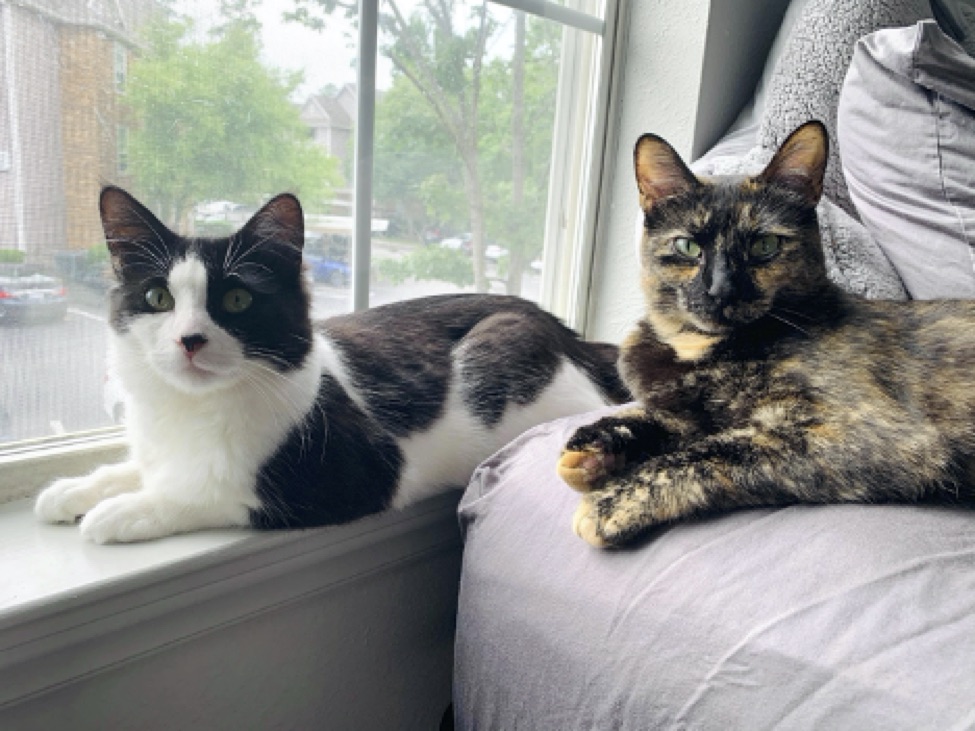 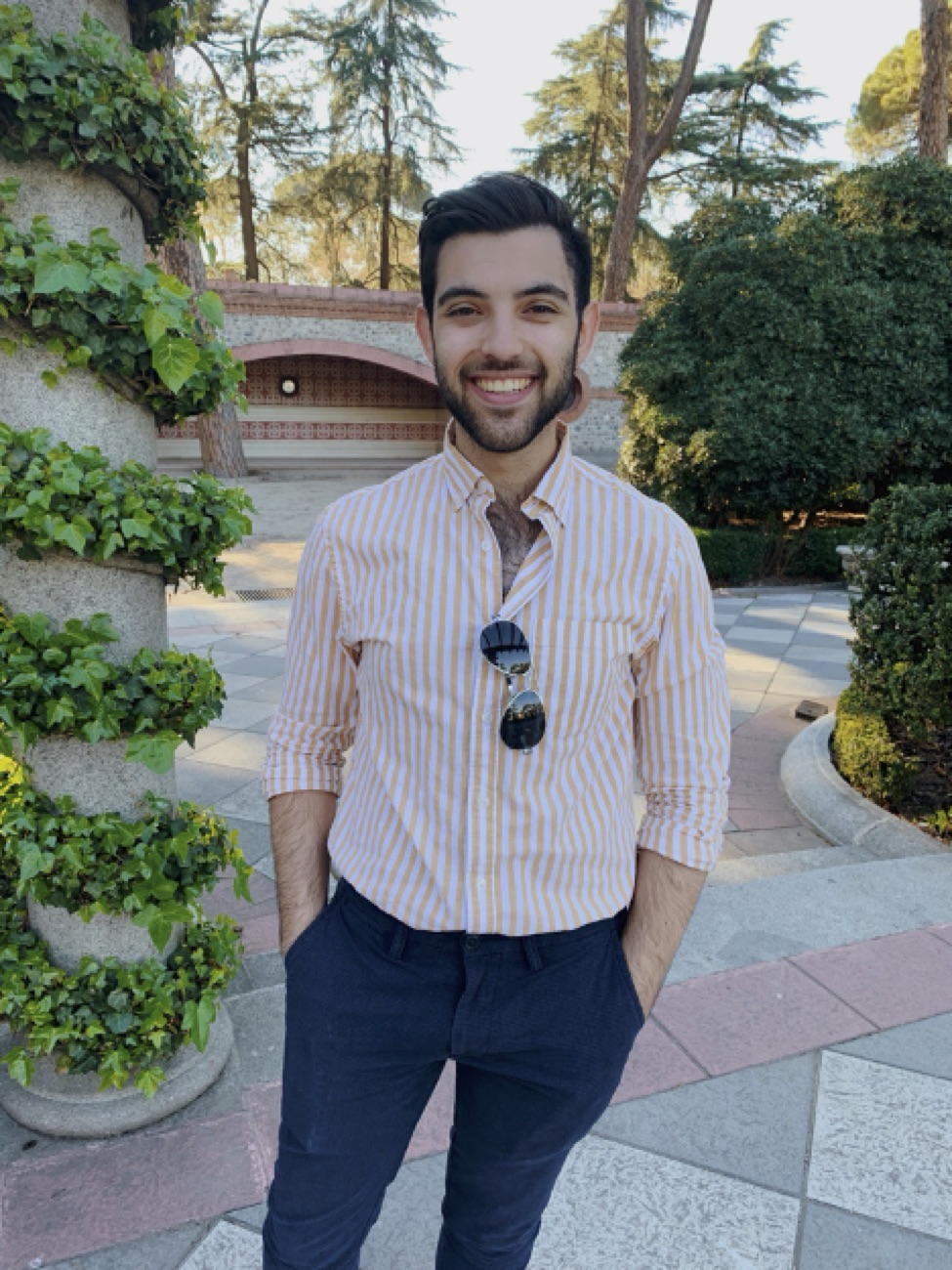 Jonathan is a fourth-year graduate student in the Department of Physics and Astronomy. His research focuses on measuring the rotation periods of stars (stellar variability), which are used as a proxy for the age of the star. Jonathan makes use of TESSand K2 light curves processed to preserve stellar variability. The greater goal is to identify (and confirm) new members of young associations and constrain the age of planets identified both in these associations and in the young field population.

The figure to the right shows the rotation period versus color sequence of Praesepe (700 Myr), Pleiades (125 Myr), and Ursa Major (400 Myr) groups. Jonathan is using these squences to aid in his search for young stars and planets. 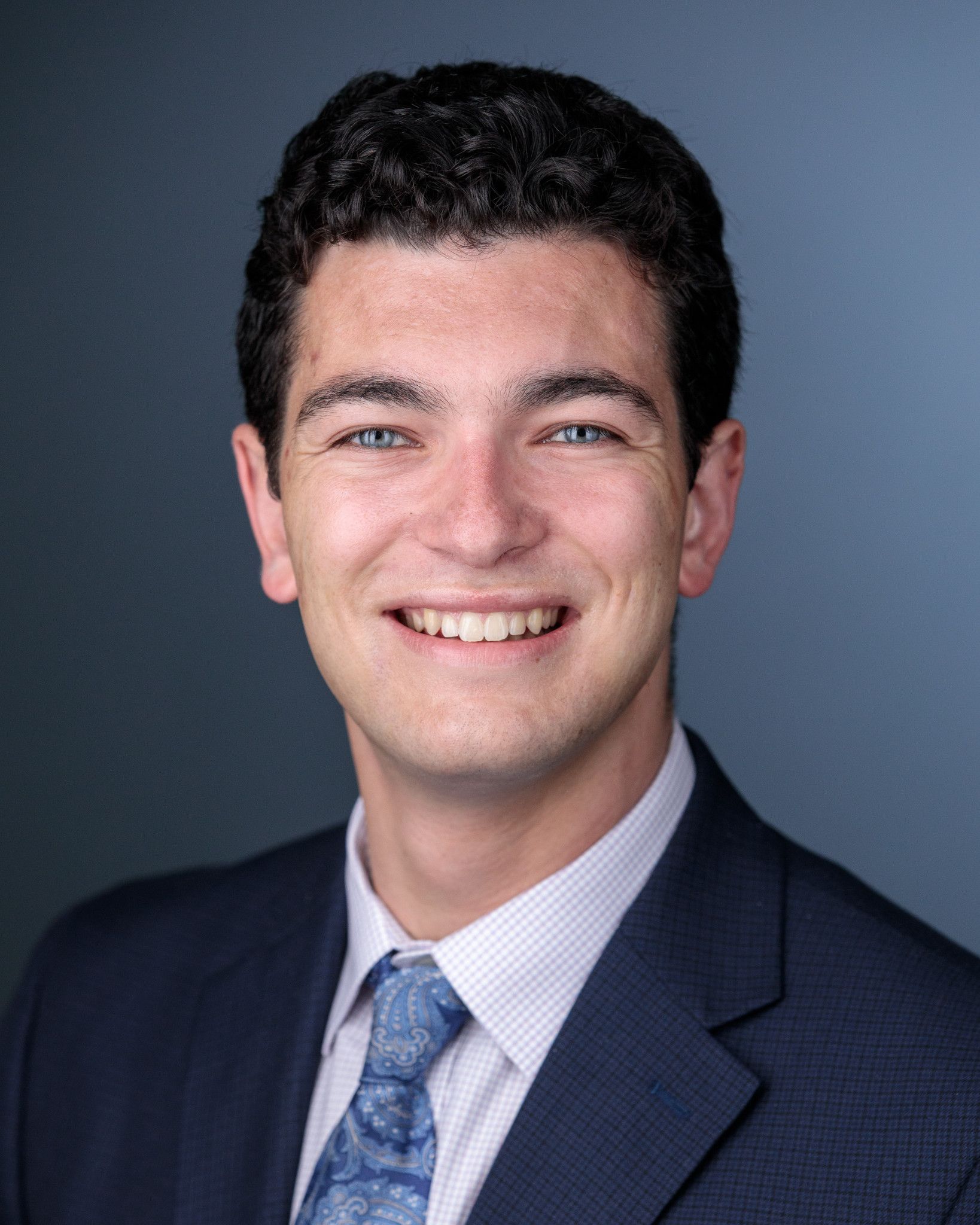 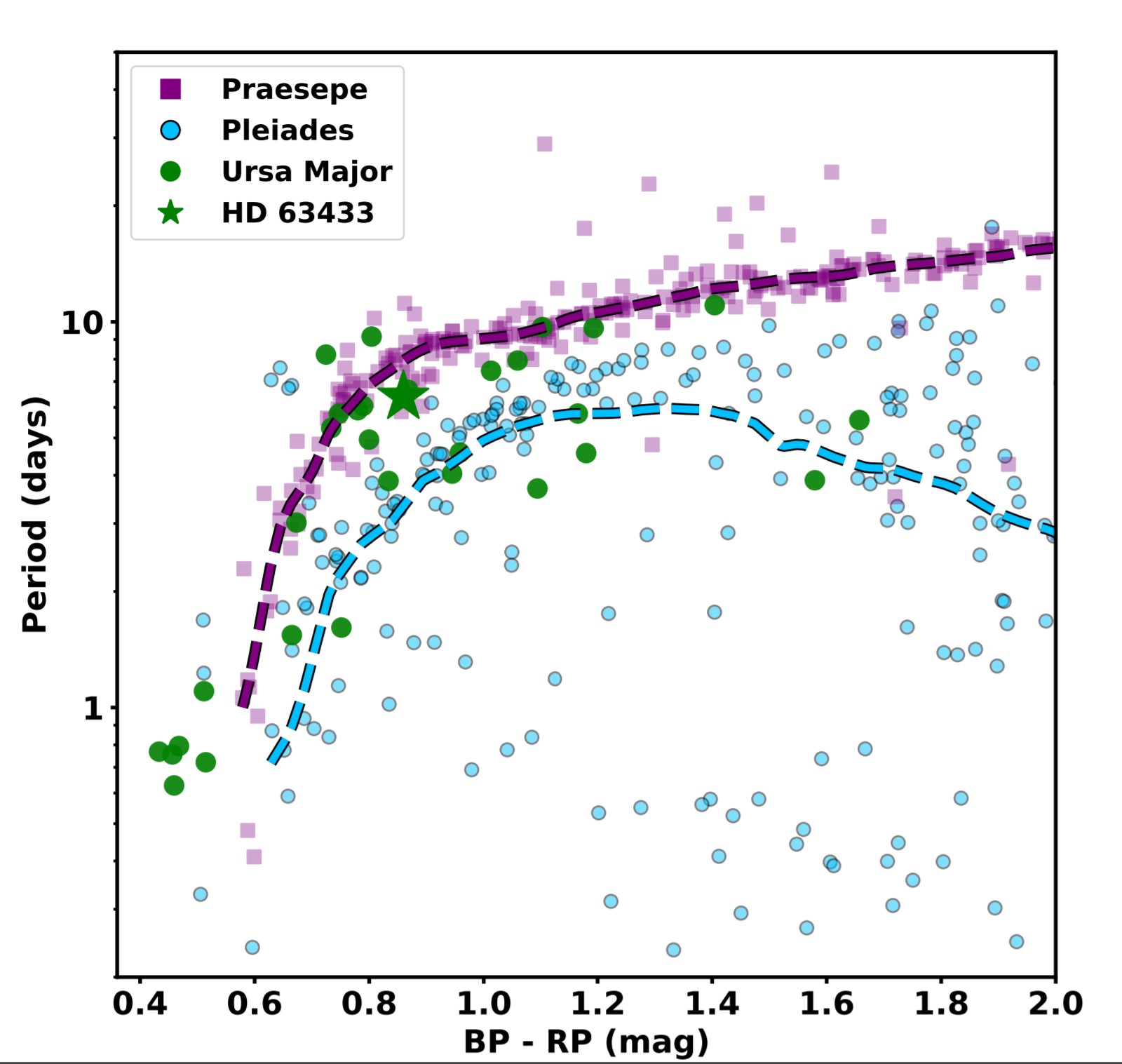 Salem is a junior astrophysics undergraduate. He studies the ages of young comoving groups from a range of metrics (e.g., rotation, kinematics, and lithium). When he isn’t doing research, he likes to hike, craft, read, and play guitar. 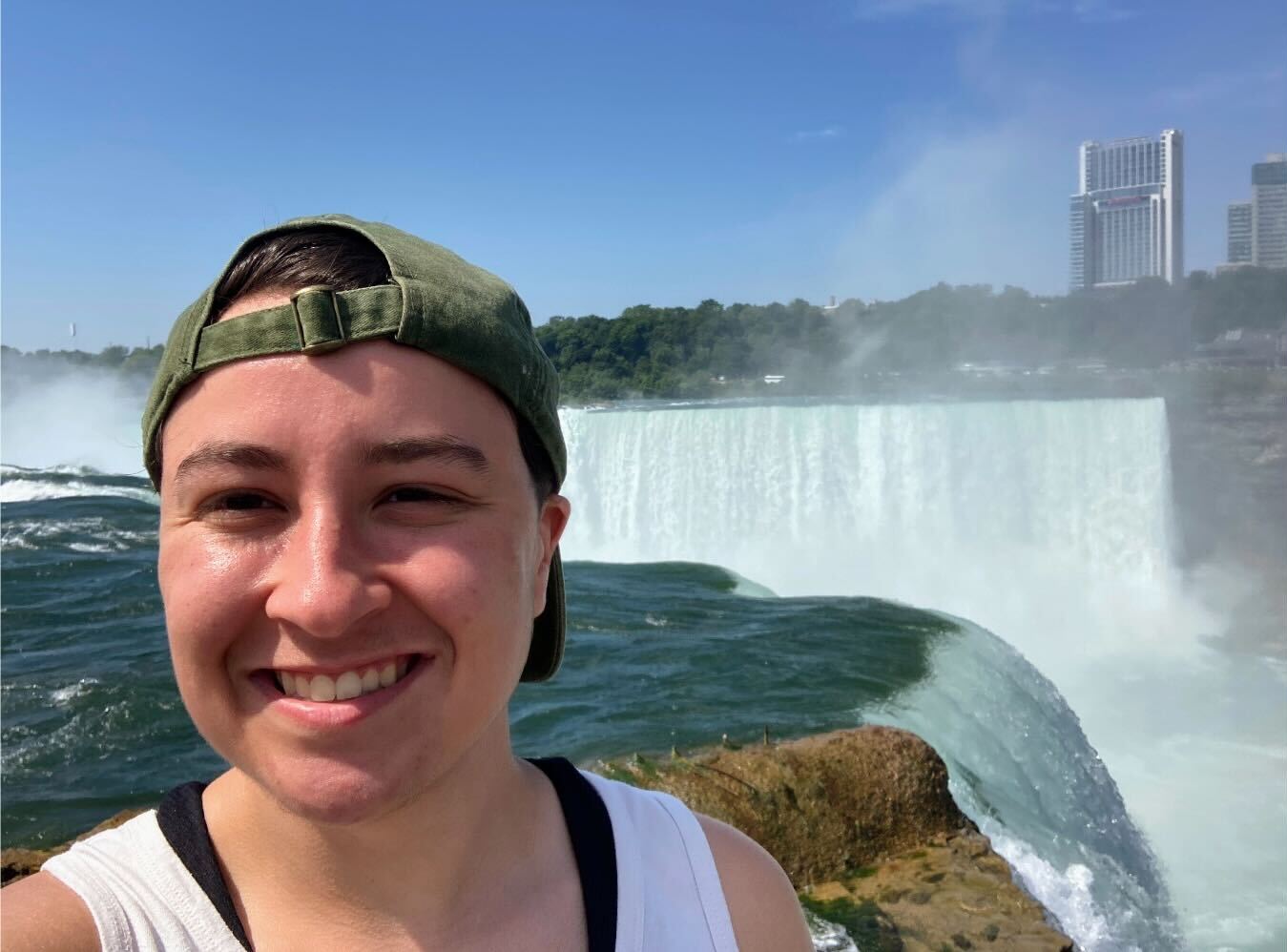